Media and Communication Panel at IAMCR 2018

The panel ‘Voices at the margins, voices of dissent: Communicative practices of minority, activist and marginalised social groups’ was organised at the conference of the International Association of Media and Communication Research (20-24 June 2018, Eugene, USA), by researchers at the department of Informatics and Media - Siddharth Chadha Kirill Filimonov, Vaia Doudaki and Piyu Gong. The panel was chaired by Prof. Nico Carpentier.

Exploring a variety of cases in different countries and cultural, social and political environments (in Russia, Sweden, China and Albania), and examining different types and spaces of media and communication, the panel attempted to address issues of participation, self-representation and expression of minority, activist and marginalised social groups. The panel explored how LGBTQ groups, radical left activist groups, environmental activists and street papers, articulate their voices, through different channels and modes, to become visible, to have their opinions heard, to claim their rights, to articulate alternative discourses over nationalist or authoritarian discourses and agendas, and to assume, claim or re/validate their identities. The panel highlighted the contradictions, tensions and limitations in these efforts.

During the panel presentations, Kirill Filimonov, through the ethnographic study of a Russian alternative media community examined how the community engages in the performance of maximalist forms of participation as a way to foster a large diversity of voices. Siddharth Chadha, through his study of the Malmö Queer Film festival, examined the discursive construction of the queer film festival as an articulation of the LGBTQ movement in Sweden. Piyu Gong’s article examined the status quo of citizen media participation by investigating the NIMBY movement – a series of citizens initiated environmental protests taking place in China. Vaia Doudaki’s research highlighted the work of street papers in Sweden and Greece as alternative media that creates spaces of inclusion for largely voiceless and invisible social groups, but also the conditions and practices that limit this potential.

2/ Kiril Filimonov (Uppsala University)
Participation as a Performance: Alternative Media and the Discursive Production of Diversity

4/ Vaia Doudaki (Uppsala University)
Street papers: Fostering the voices of the voiceless and the invisible 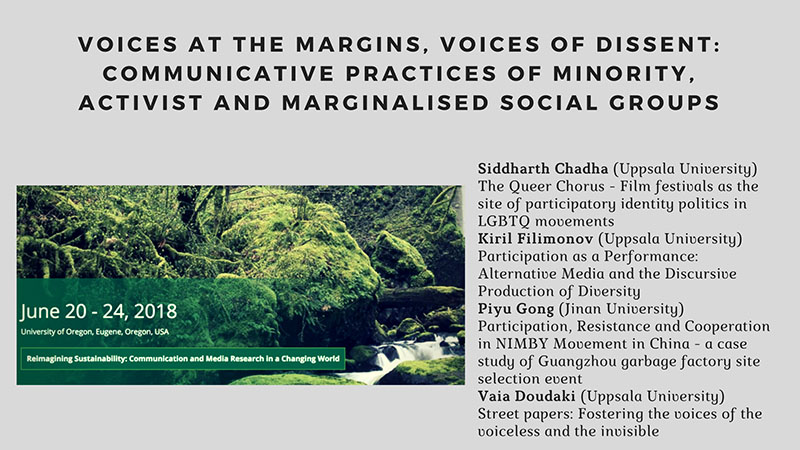